FIXTURES - The Lady Captain’s Prize to the men was played on Sunday the 30th of August, results to follow during the week.
The annual fundraiser for Our Lady’s Hospital for Sick Children, the “Crumlin Classic” was played over the weekend of the 22nd and 23rd of August, the results were as follows - 1st - Mark O’Donohoe, Tadhg Lowe, Marc O’Connor - 91 points 2nd - Lorcan Egan, Paul Connolly, Ciarán Beirne - 88 points (countback) 3rd - Lee McKillen, Jim Suffin, Martin Daly 88 points.

FIXTURES - The ladies’ biggest competition of the year, the Lady Captain’s Prize, takes place next Sunday the 6th of September. This year’s Lady Captain is Therese O’Daly.

Posted by realboyle.com at 12:24 AM No comments: 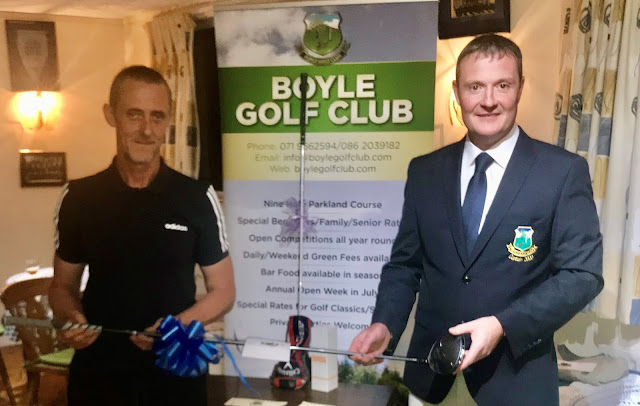 CAPTAINS DAY 2020 - Lorcan Egan’s  Captains Day was a major success in every respect, from the weather holding out for the day, the biggest field participating in recent memory, and capped by a new name winning his first major, Martin Daly. Martin did extremely well to have the lead after the first 18 and maintain it throughout the 9 hole playoff later in the evening, especially as he had never been in a playoff previously.

The presentation took place the same evening in the clubhouse. The captain   congratulated all the winners and paid  tribute to the assistance he had received throughout the year and especially in the week leading up to the Captains Prize. He also thanked our generous local sponsors and noted the huge increase in the numbers playing golf during the year.

CAPTAINS PRIZE TO THE LADIES - Results of today's competition

THANKS - Sincere thanks to Tom Kearney who generously sponsored the meat for the Captains Day barbecue.

FIXTURES - Next weekend is the annual fundraiser for Our Lady’s Hospital for Dick Children, the “Crumlin Classic’”, played as a threeball rumble.

CONGRATULATIONS - to Lewis Shaw on his recent engagement. We hear Ted is looking forward to the stag do already!

MEMBERSHIP STICKERS - Membership stickers for those who have paid up for 2020, or are paying by monthly debit, are available for collection in the office of Vincent and Lorcan Egan, Elphin Street.

BOOKING APP - Members are encouraged to download and use the new BRS booking app which should eliminate some of the glitches that occur with the version currently is use. Look in your App Store or on Google Play for “BRS Golf”.

FIXTURES - The Captains Prize to the Ladies takes place next Sunday the 9th of August.

The mens’ competition that day will be an 18 hole Stableford and will be the last opportunity to gain a “qualifying” card  to be eligible to win the Captains Prize for those who have not already played in an 18 hole qualifying competition this year.

MEMBERSHIP STICKERS - Membership stickers for all who have paid up for 2020, or are paying by monthly debit, are available for collection in the office of Vincent and Lorcan Egan, Elphin Street.

CAPTAINS PRIZE - The big event of the year for the men, the Captains Prize, is fast approaching. Lorcan Egan is this year’s mens’ Captain and his day will be on Sunday the 16th of August. For the mens’ prize, it is essential to have played just one 18 hole qualifying competition this year, a reduction from the traditional 3 given the shortened golfing season. There is still one opportunity left to get a card in if you haven’t already done so.

On Thursday the 13th, there will be a presentation of all the mens’ Thursday competition prizes to date. Sponsors for the Thursdays are asked to get their prizes to Lorcan Egan before this date. A ladies’ and gents’ scramble competition will be held on the evening of Friday the 14th, all members are strongly encouraged to attend.

On the Captains Prize day itself, food will be available in the form of a barbecue throughout the day.

Posted by realboyle.com at 11:43 PM No comments: