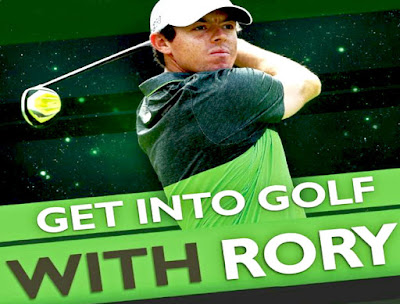 Following on from the visits to some of the local primary schools last Tuesday, and an information night on Thursday last, our 'Get into Golf with Rory' Program in conjunction with the CGI will commence at Boyle Golf Club this Wednesday 1st June from 6pm.

The program is suitable for primary school pupils aged 8 and upwards.

We have had a large number expressing interest in this program already, with many of the spaces now filled, however some vacancies remain.

The cost of the program is €40 per child, with a goodie bag and certificate from the CGI being presented to each participant on completion of the program.

Equipment is not required, however those who have some should bring it along.
If you are a parent/guardian of a child of the relevant age, and wish for them to participate, please contact the number on the promotional poster.

PGA Professional Peter Duignan from County Longford Golf Club will conduct the one hour sessions each Wednesday for five weeks.*
*The entire program will be in compliance with the child safeguarding policies as laid out by the Confederation of Golf in Ireland
Posted by realboyle.com at 1:52 PM 1 comment:

Fixtures
On Sunday next, May 29th, there will be two 18 hole stroke competitions, one for ladies & one for gents. These are the President’s Prize to Ladies and Round 8 of our Golfer of the Year Competition respectively.
As usual, a 12 hole open competition will take place on Thursday for gents and a scramble on Friday Evening for all members.

Interclub Golf
Commiserations to the Seniors Team who were beaten by Strandhill on a scoreline of 3.5-1.5 last Wednesday. On a more positive note, a massive well done to Brendan Gaffney and his Jimmy Bruen team who defeated a Strandhill outfit, a club regarded as one of the kingpins of Connacht golf at that level. Shane O’Dowd & Jonathan Egan provided the decisive winning point away from home after fighting back from 3 down to seal victory on the 19th. Next up is neighbouring 9 holer Ballaghaderreen.
There was disappointment for the ladies Revive Active Fourball team who were beaten 3-2 by Ballinrobe on Monday.
Upcoming matches include ties against Castle Dargan in the Mixed Foursomes on Wednesday and again in the Pierce Purcell on Saturday. Both of these are home draws.

Club Matchplay
Round 1 matches in the King Harmon Cup are now completed. Well done to all who have progressed. The deadline for round 2 matches to be played by is Saturday June 4th.

Get into Golf Schools Program
On Tuesday some representatives from the club visited two primary schools in Boyle along with the CGIs participation officer Justin O’Byrne. The main aim of this program is to give kids their first taste of golf in a fun and safe environment, and to invite them to come along with their parents to an introductory night at the golf club this Thursday evening at 7.30pm for one hour. More coverage of our visits to follow.

Posted by realboyle.com at 6:09 AM No comments:

Results
Last Sunday’s 18 Hole S/Ford was won by Martin Wynne (12) 42pts, in second was Michael Bannon 42pts, the gross prize was claimed by Brendan Gaffney, and in 3rd position was Michael Gilmartin (18) 38pts.
The Golfer of the Year competition is now through round 5, and an updated leaderboard will be a available on the website shortly.
Thursday’s 12 Hole Mens Open was won by Pat Conroy 26pts, 2nd Lorcan Egan 24pts, 3rd Seamus Gallagher 23pts.
Friday’s Scramble was won by John McGuinn, Pat Conroy, Marie Gallagher.

Fixtures
Fixtures for this week are are Thursday’s Open 12 Hole S/Ford for men, Friday’s Scramble – Draw at 6.15pm with a 6.30pm start.
The PGA Tankard 18 Hole S/Ford (G.O.Y. Round 6) will take place on Sunday May 15th. The winner will represent the club in the regional qualifier pro-am at Royal Tara in August.

Course Maintenance
Hollow coring of the greens has been completed on the greens today and volunteers are required to clear the cores and brush in the sand.

Junior Golf
Junior golf lessons will recommence on Saturday next May 14th from 11am to 1pm.
Posted by realboyle.com at 7:29 AM No comments:

The weekend opened on a positive note with the successful running of our Quiz and Curry Night on Friday. The winning team was comprised of Aileen Madden, Claire Cryan, Aisling Gaughran & Lizzie O’Sullivan. In second place was Tommy King, Liam Mullaney, Michael Rush & Gary Carty. Thanks to Susan and Brendan who coordinated proceedings and to Mary who provided the catering.

Also, the monthly meetings of the men’s and ladies club will take place at 8.30pm in the clubhouse. It will be followed by the management meeting.

Golf lessons for juniors will resume on the morning of Saturday May 14th. Arrangements are also being made for the recommencement of a weekly golf class for adults. More details to follow.
Posted by realboyle.com at 10:51 PM No comments: